This year our Ideas Report showed that 42.3% of women question whether they have the skills to pull an idea off, compared to 29.6% of men. Why do women question their skills and themselves? Writer and broadcaster Afua Hirsch explores this troublesome statistic with regards to age, race and gender. 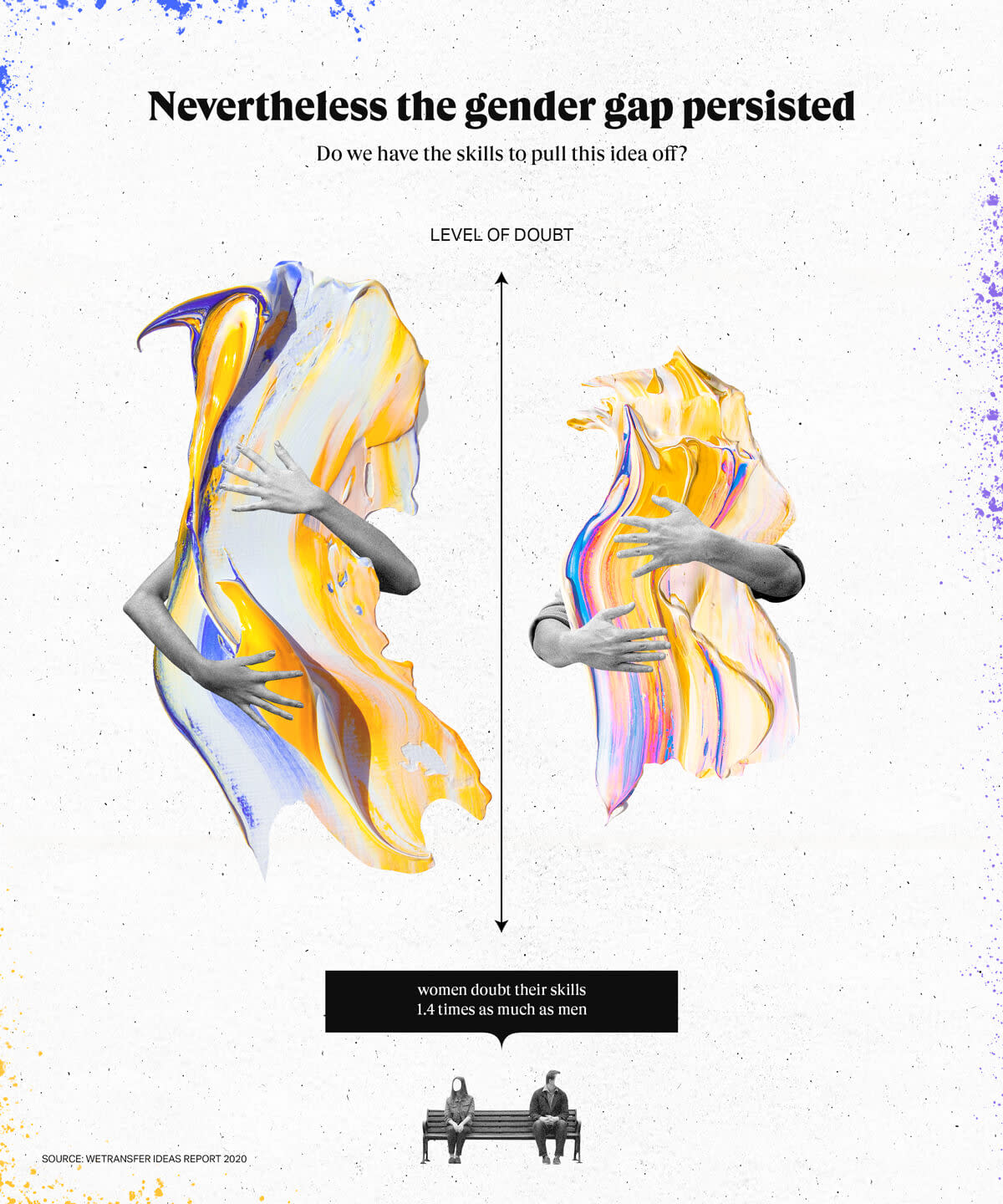 I heard Bernardine Evaristo, the 2019 Booker prize-winning author, on the radio the other day, describing what happens to women as we age. Older women, she advised, would do well to wear bright, bold colours, to ward off the evil spirits of invisibility, and shrinkage. Not the physical shrinkage that comes with age. The far more pernicious kind, where you shrink yourself, as a symbiotic response to a world of youth worship that regards older women as redundant, and invisible. The world conspires us to make women disappear as we get older, to fade into the furniture, and we are complicit, and accepting. Until we aren’t.

I didn’t actually hear Bernardine saying this, even though I make an effort to listen to, watch and obviously read as much of her work as I can. One of my proudest moments of overcoming doubt was playing my part in voting for her book Girl, Woman, Other to win the Booker Prize, as one of the award’s five judges. Bernardine didn’t have a US book deal at the time, and described herself as having, until just days earlier, “giving talks in half empty bookshops.” Now Barack Obama is citing her, and Chelsea Handler is posing nude with Girl, Woman, Other over her boobs. It doesn’t make any difference to the quality of Evaristo’s decades-long body of work. It just aligns the outside world to the brilliance that she already had within.

The person telling me about Bernardine’s wisdom was another woman – interviewing me in front of a live audience – acknowledging our outfits, the fact that she was wearing a luminous pink dress, I was in a print of bright red. Then she disclosed she had just changed the script written for my introduction. She’d been given the words, “I don’t want to embarrass you, but…” before running through my biography. “I just realised the message that sends,” she confessed. “Why is describing your achievements embarrassing?”

The truth is, it is embarrassing. Even writing this, I’m thinking, does referencing my achievements sound boastful? Does mentioning the fact I was a Booker judge sound narcissistic? The reason I wanted to write this essay is because living with doubt is such a key part of my creative process, so embedded in my mental architecture, that without taking the time to acknowledge it, I sometimes forget that it’s there.

Maybe the only thing worse than doubting yourself, is knowing your success is conditional on keeping your doubt hidden at all times.
tweet

But the more research that is conducted into this subject, the harder I find it to sustain the myth that my self-doubt is a personal shortcoming. Women are plagued by doubt. WeTransfer’s new Ideas Report, questioning over 30,000 creatives about how they get ideas, is the latest to hold a lamp up to this once dark swamp of doubt. It found, for example, that 42.3% of women question whether they have the skills to pull an idea off, compared to 29.6% of men.

This will sound familiar to anyone who has followed previous research. A famous Hewlet Packard internal report, for example, which found that men apply for jobs even if they meet only 60% of the qualifications, while women only apply if they meet 100% of the requirements. Or an earlier study which showed that women’s contributions to a team were consistently undervalued compared to male peers, unless their competence was explicitly highlighted.

It’s hard to tell how much this is women underestimating ourselves, or how much it’s a reflection that we are being compared to men who overestimate their own value. Whilst women now have a plethora of names for our self-doubt, the confidence gap, imposter syndrome, men have “honest overconfidence,” a term one academic coined to describe the way men overestimated their own ability, not as a result of conscious dishonesty, but because they genuinely believe they are better than they are.

Of all the threads to this burgeoning body of inquiry, the one that struck my curiosity was that regarding the amygdala. This part of the brain is a kind of central hub for fear, processing emotional memory and responding to stress. Research has found that women activate their amygdalae more easily in response to negative emotional experiences than men do.

Much of the advice for overcoming self-doubt is to act like men, cultivate honest overconfidence, speak up, reach out, lean in. But we still pay a penalty for doing so.
tweet

My knowledge of the amygdala comes from a different context. For years I’ve been following findings that overstimulation of the amygdalae resulting from deep trauma can have epigenetic consequences. That means the physiological changes caused by fear and traumatic memory are capable of being handed down through generations. It’s been offered as an explanation as to how the grandchildren of Holocaust survivors, for example, are capable of inheriting PTSD from an experience they themselves did not live through. And as insight into the operation of Post Traumatic Slave Syndrome, which is believed to have caused physiological change to those descended of slavery, passing on the effects of trauma to today.

I’m not surprised that this is lacking from most of the analysis of self-doubt and self-underestimation that women experience. Any cursory glance at the literature – most of which revolves around our experiences at work – will reveal how entirely it seems oriented towards white women. As someone who approaches this with an intersectional lens, that doesn’t render it irrelevant. When, on an episode of the When To Jump podcast, Sheryl Sandberg recounts her story of being offered a job by Eric Schmidt, the then CEO of Google, I listen. To paraphrase, it went like this. Sandberg: “I love Google. I want to take this job. But I don’t know what this job is.” Schmidt: “Sheryl, don’t be an idiot. If you’re offered a seat on a rocket ship, get on, don’t ask what seat.”

Women are more likely to ask what seat. Black women are less likely to get offered a seat in the first place. If we are, we are guaranteed to be highly self-conscious that we are almost certainly the only person of color on the rocket.

Much of the advice for overcoming self-doubt is to act like men, cultivate honest overconfidence, speak up, reach out, lean in. But we still pay a penalty for doing so. Black women in particular are more likely to be perceived as aggressive, scary and angry, whilst all the while combating the extreme visibility of being in a minority, too often, of one.

I recently took a course with a small group of Black women who are all at senior levels of their corporate career, or run successful businesses. I have to confess to having been a little sceptical. I’m not on a corporate path, and being British, I have a well-established aversion to the American fondness for sharing, pivoting, leaning in and other such concepts whose meaning I don’t intuitively grasp. When our coach said that she was “holding us all in a sacred space,” I think I visibly squirmed.

Women are more likely to ask what seat. Black women are less likely to get offered a seat in the first place.
tweet

But you know what, it was life changing. Partly because it gave me permission to take time out to think about how my inner and outer worlds collide and partly because the women I was with opened up about how the pressures we all face manifest in their daily lives. On the surface, we probably look like people who have overcome or transcended the doubt that affects our gender, and doubly affects black women. But in reality, we live with the tyranny of imagining how catastrophic it would be to let that doubt show. Maybe the only thing worse than doubting yourself, is knowing your success is conditional on keeping your doubt hidden at all times.

I’m not embarrassed by my devotion to safe spaces, we need them. If you are surrounded by men who fanatically believe in their own self-overestimation, or if you are a hyper-visible only Black person, you need to experience the community of not being other. You need to experience doubt being normal. And work out how to cope with it.

We need to cope with doubt because it can’t be wished away through upbeat books by successful women. Doubt is a symptom not a cause. As Black women it reflects the reality that we operate in a system that was not built for us. That we work in organisations that did not, at their inception, imagine us. That we consume products that were not designed for us. We experience doubt by degrees according to the extent from which we diverge from the person it was built for, who was imagined, who consumption was designed for. That person is still white, and male, and guess what? His problem is overconfidence.

So I have learned to own my doubt, and use it as a constant reminder that the world needs to change shape. Meanwhile, I highly recommend proactively finding ways of managing yours because, unexpectedly, the need to live with my doubt has brought me into community with other doubt-ridden women who have ended up bringing me great joy.

See the full Ideas Report here and find out how 2020 impacted the work of 35,000 creatives. 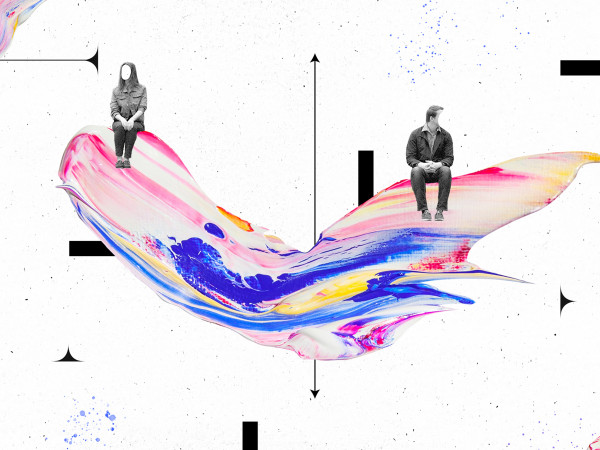 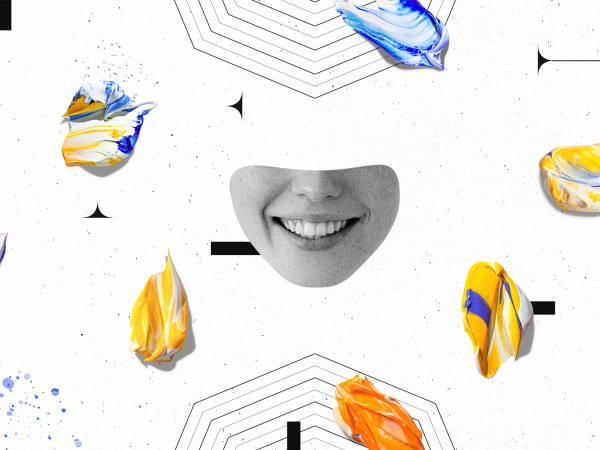 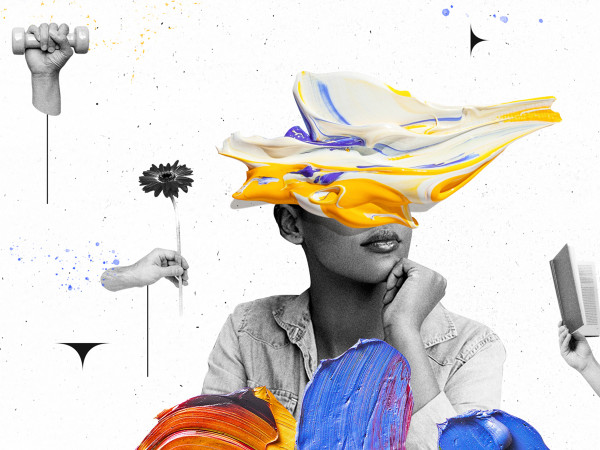 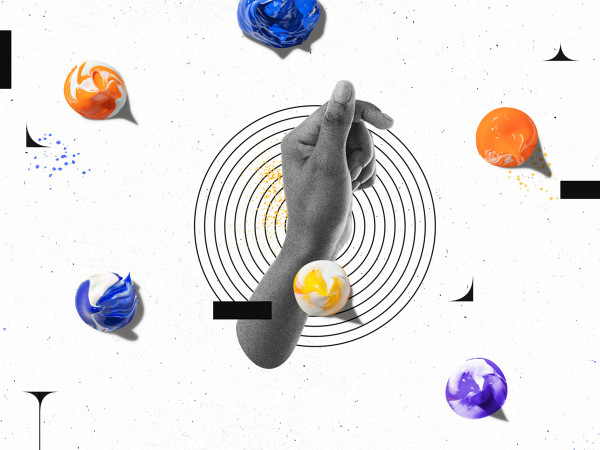 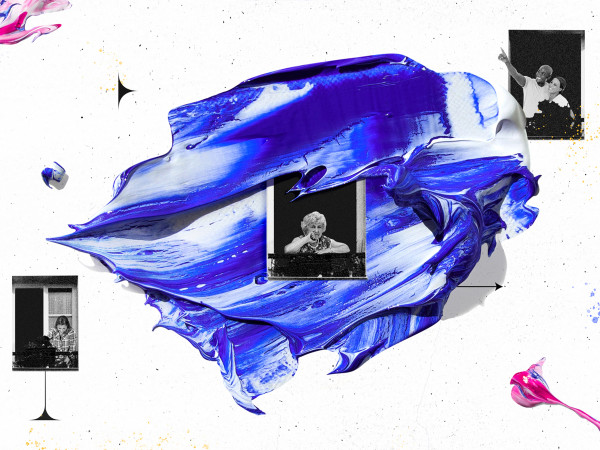 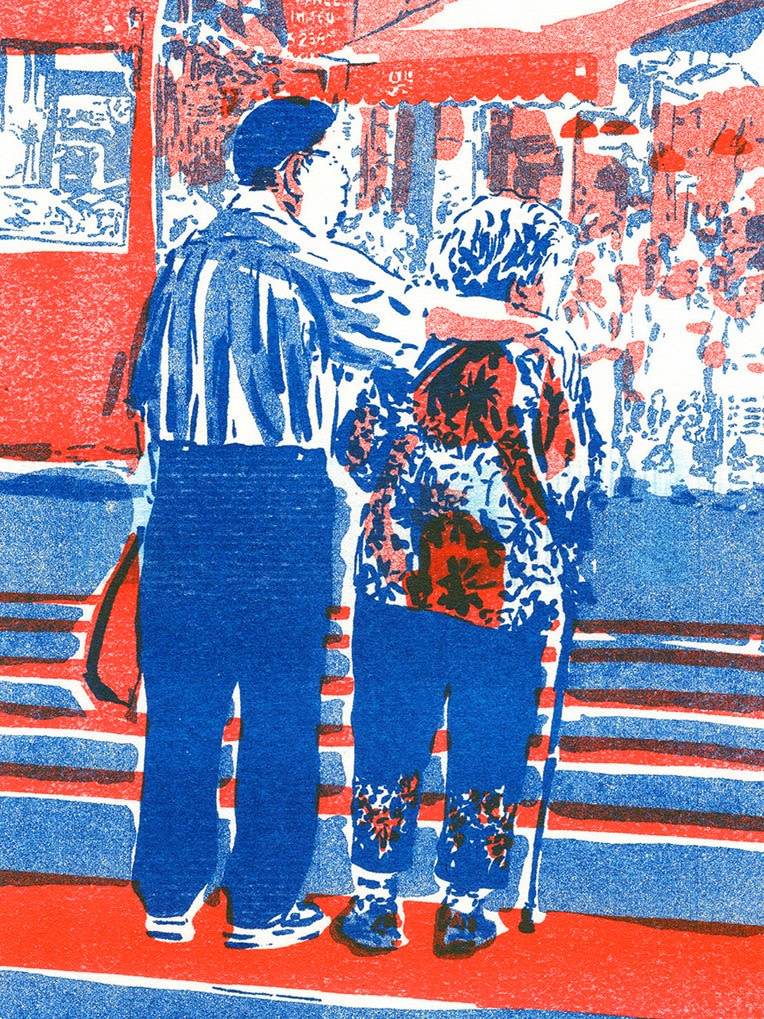