Björk’s newest music video, Arisen My Senses, features giant, slug-type-creatures writhing around. Weirdly for Björk – and collaborator Jesse Kanda – this doesn’t seem that weird. Liv Siddall looks at the musician’s creative legacy and meets the man you call when you need a giant rubber slug suit...

When it comes to Björk’s videos, no concept seems too far-fetched. Since the early 1990s, the Icelandic artist has worked with some of the most exciting creatives around to produce some of the most jaw-dropping and beautifully-executed music videos the world has ever seen.

From Michel Gondry (Hyperballad, Crystalline and Army of Me) and Spike Jonze (It’s Oh So Quiet) to Chris Cunningham’s bonkers, brilliant robot treatment for All is Full Of Love, they are the kind of music videos people still talk about 20 years later (and the sort creatives cite as inspiration for their entire careers).

And even though the industry has changed massively since she emerged in the early 90s, Björk still believes defiantly in bringing aesthetic to the music she creates. Her albums are more projects than collections of songs, with creative collaborations that make everything else around them seem stagnant or passée. 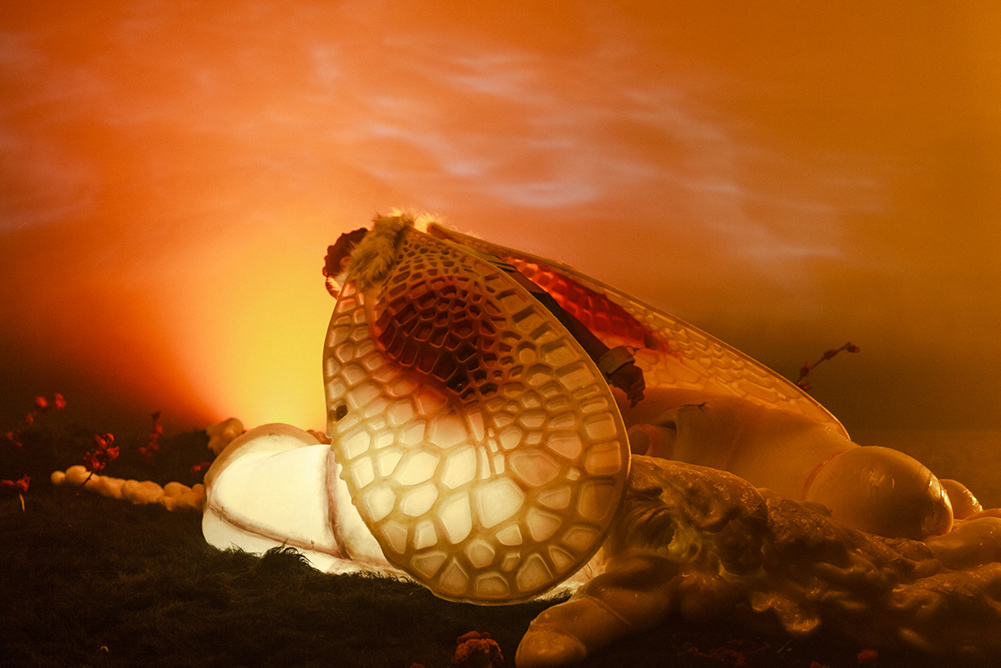 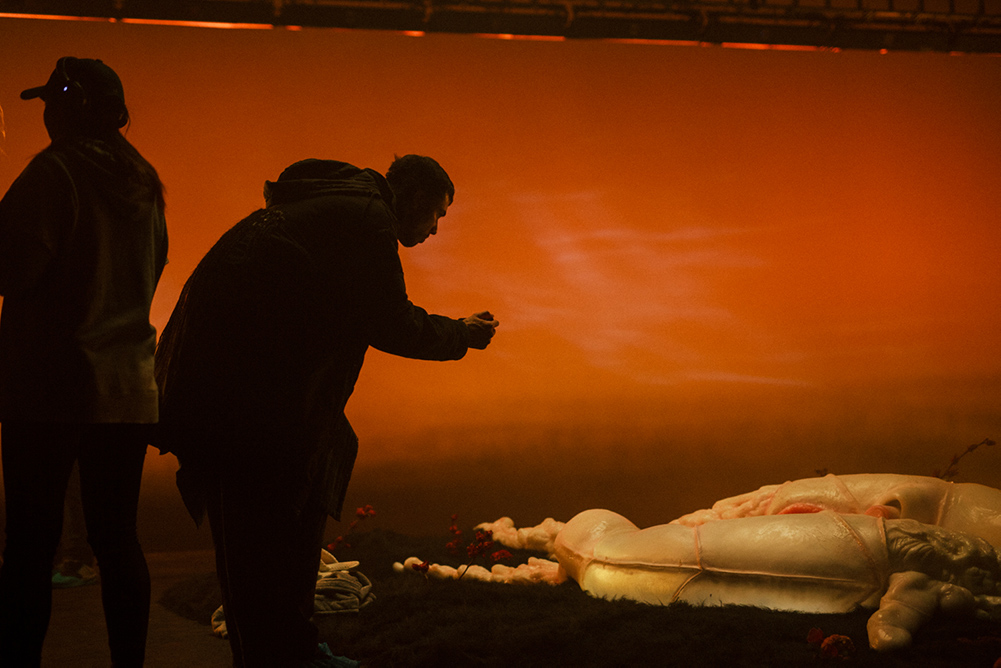 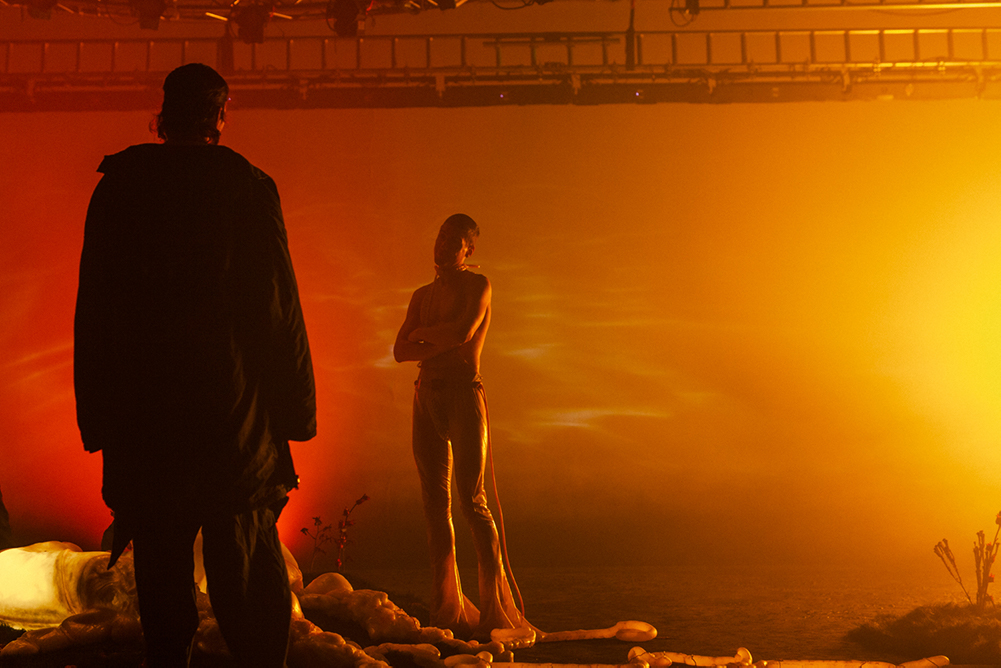 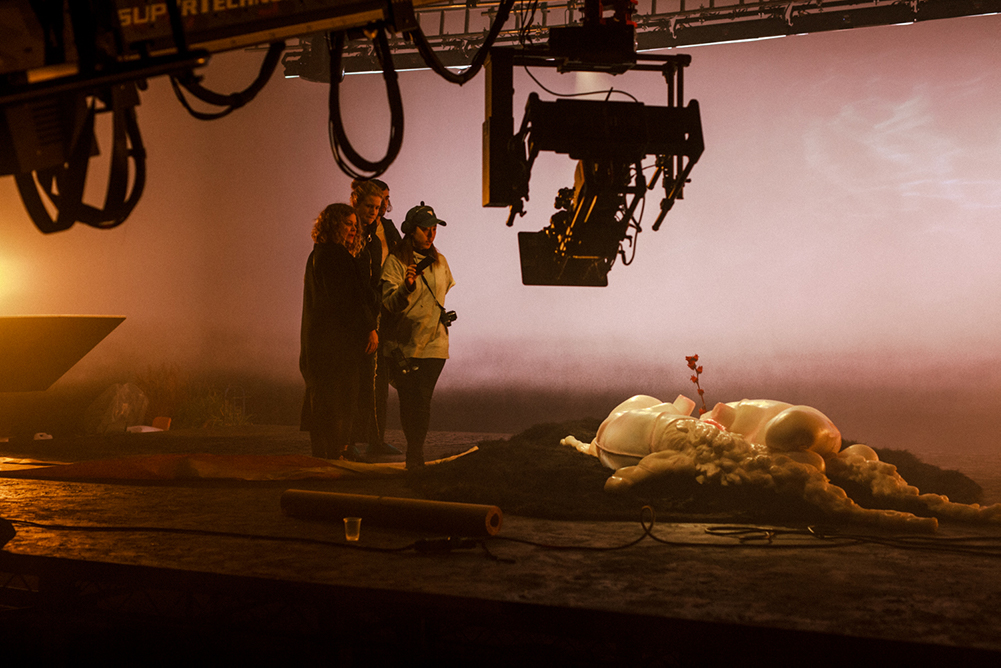 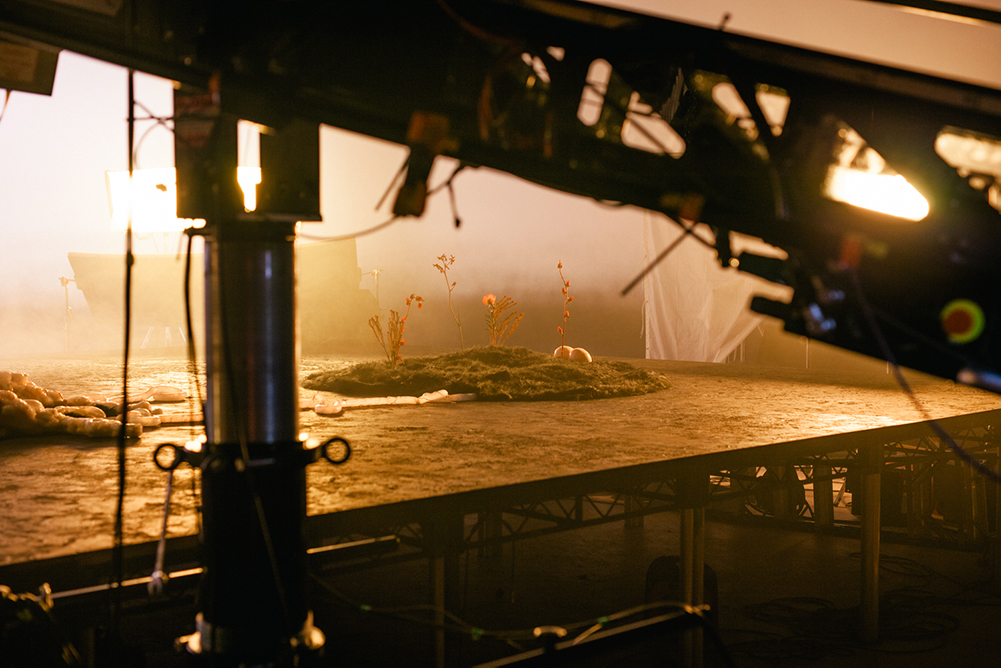 Behind the scenes on the video shoot – 1/5

It’s testament to Björk’s legacy that it’s not surprising to hear that in her new video she appears inside an enormous, writhing, alien-slug sculpture.

Her latest album Utopia continues that trend. The Andrew Thomas Huang-directed video for The Gate is a mind-blowing piece of work which features Björk as a futuristic, folkloric angel in a sci-fi-meets-Studio-Ghibli world. Later she appears wearing a dress designed by Gucci’s creative director, Alessandro Michele, that apparently took 900 hours to make.

For Arisen My Senses, Björk and Jesse Kanda drew on a strange and beautiful set of influences. “A couple of years ago, this giant unidentified creature washed up in Indonesia,” Jesse explains. “It was this gorgeous mound of white skin and fat and flesh in a pool of blood on a sunny beach. That really moved me – like total awe. It was the combination of something so catastrophic being so beautiful at the same time, the mystery and fantasy of what it actually was, and the connection to the grander ecological context.

“Björk had been playing a video of leopard slugs mating at her concerts, so I knew she and I both loved that as an image. And another kind of obsession I keep coming back to is amniotic sacks, and making sculptural work that depicts birth and death. But this is the first time I did birth, death and mating at the same time.”

Tristan (known as “Schoony” in the industry) is the son of legendary life-cast and special effects artist John Schoonraad, whose lengthy career saw him work on films (Return of the Jedi and Indiana Jones) to music videos for Robbie Williams, Grace Jones, and even Björk herself (1997’s Hunter).

John is the creative director of Lifecast – a special effects, 3D printing and lifecasting studio based in the famous Elstree Film and TV Studios in north London.  John’s team is made up exclusively of his sons – Tristan, Robin and Max – who have been helping their father on projects since they were children.

Tristan began his work in special effects at the age of 15 and is now the Workshop Supervisor and Director of Life3D, and an artist in his own right. He’s a strange man. Covered in dust and breathing almost exclusively through a vape, the bizarre nature of his work contrasts with his deadpan manner, staccato sentences and lack of interest in celebrity.

His passion for creating lifelike molds, casts and other special effects is not reflected in his knowledge of why things are made. In terms of his involvement in Arisen My Senses, he doesn’t seem too interested in the concept. “They wanted two slugs,” he shrugs. “They said normal slugs, but it’s changed since the first meeting we had with the director.”

He’s actually made work for Björk before, helping his dad on the mold of her head for the Hunter video, which was later used again for the robo-Björks in All is Full of Love.

As the project went on, the creatures evolved to have arms and legs, making them something much weirder. “Alien. Almost like an embryo. Slug’s the wrong word really.” 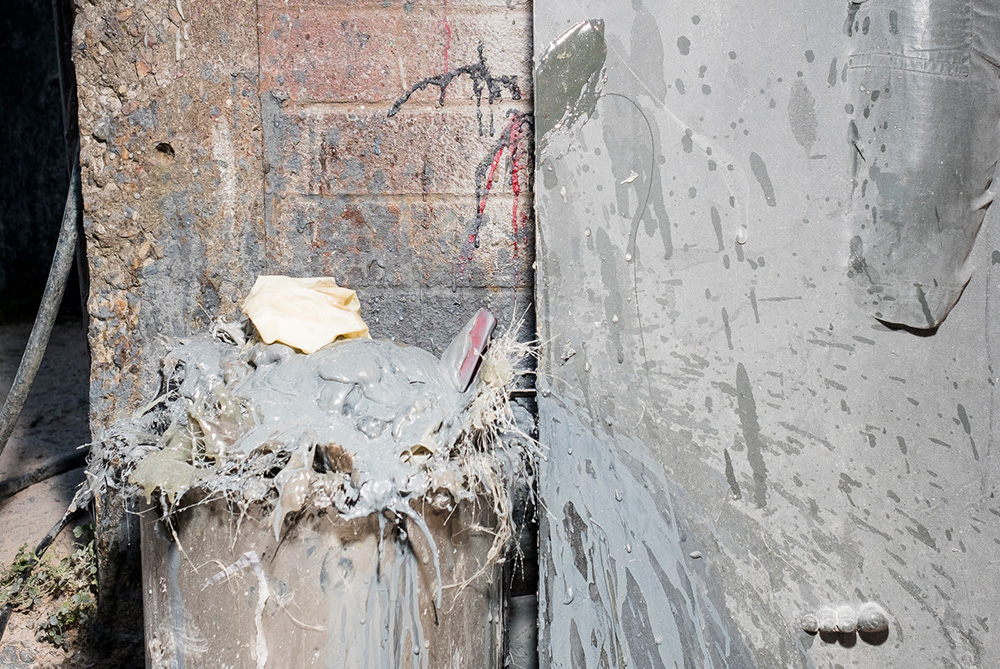 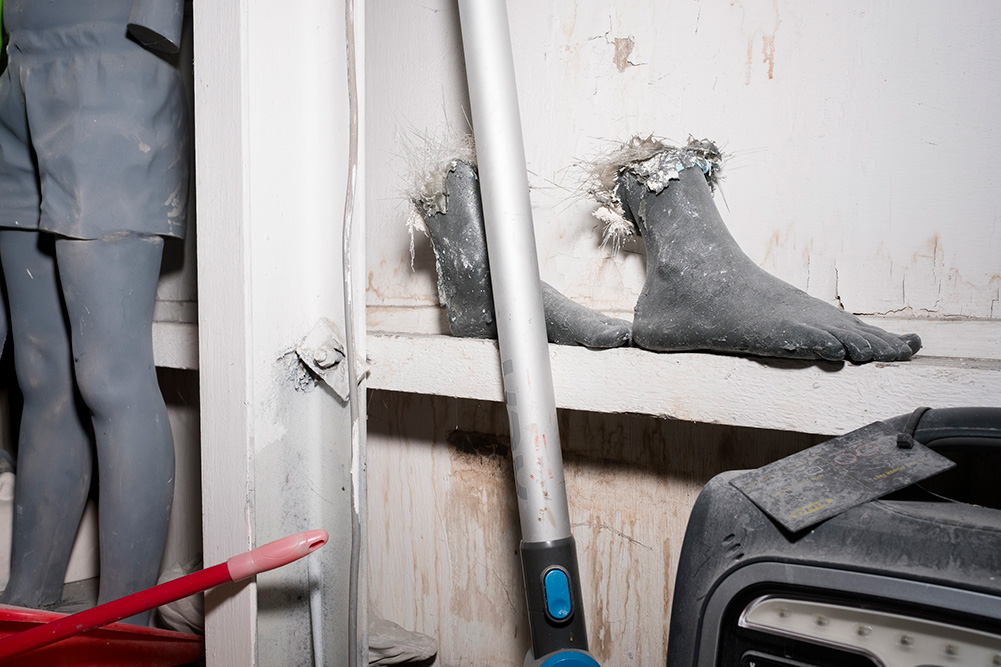 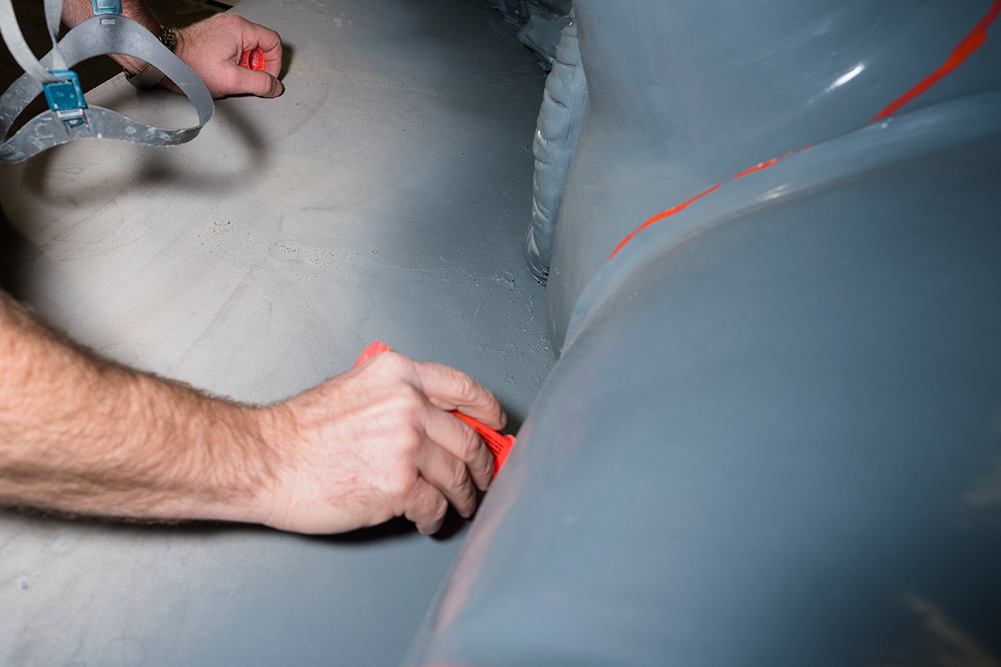 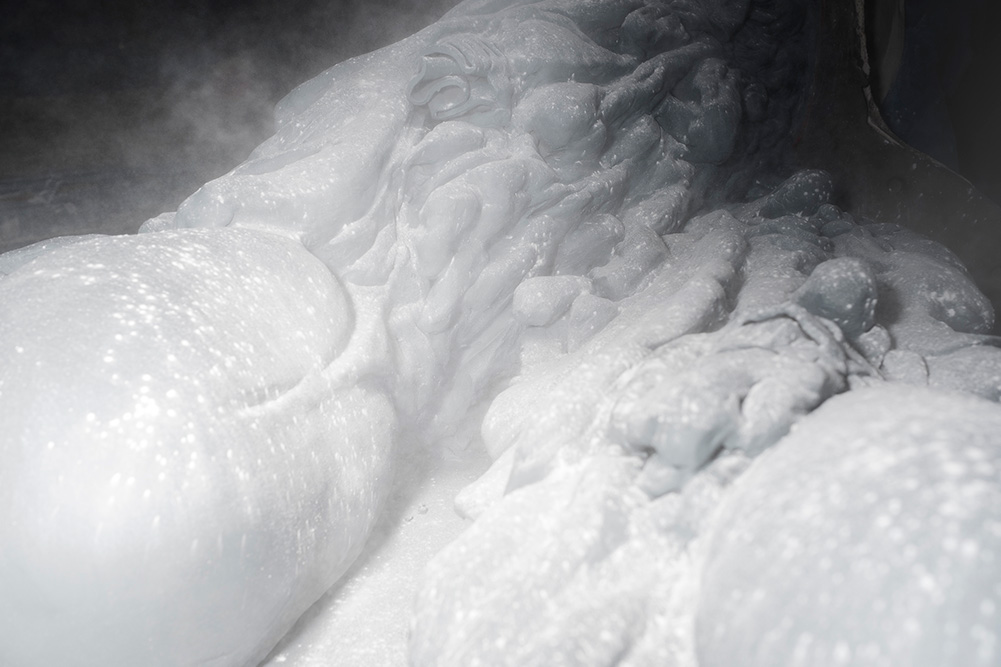 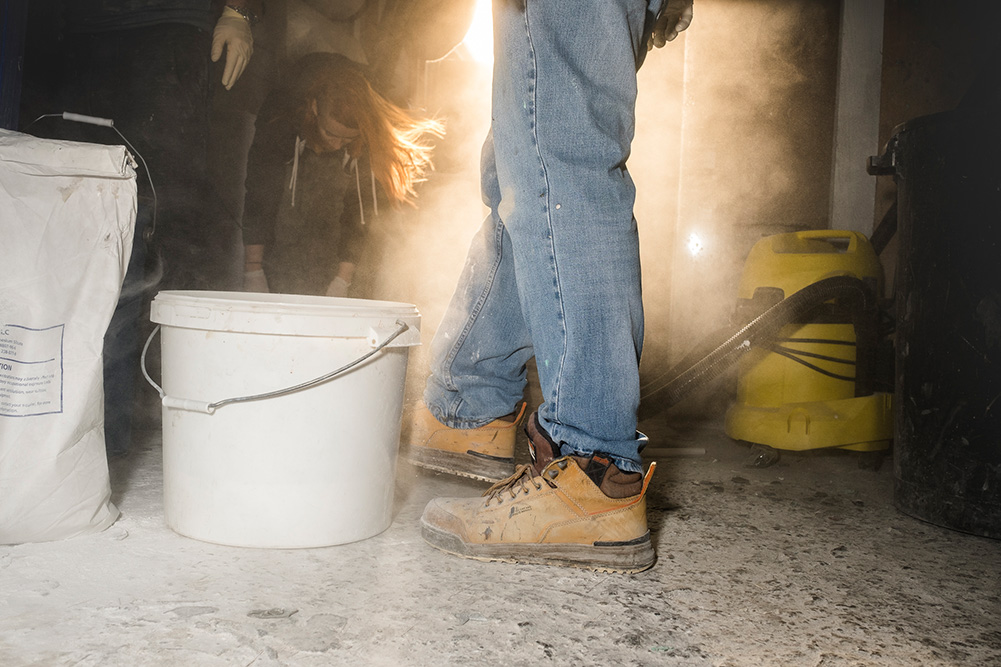 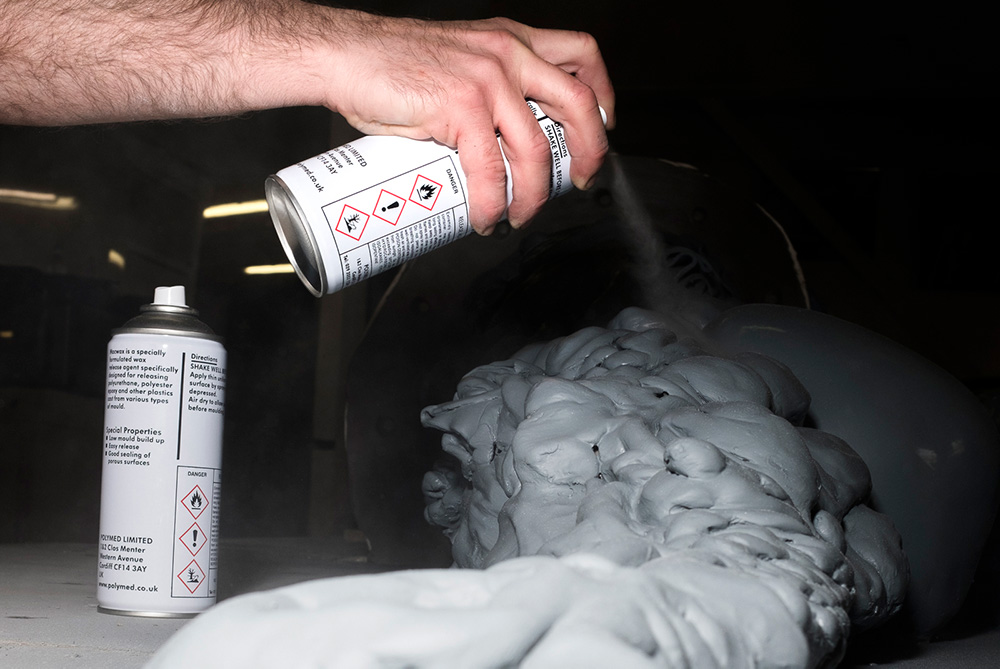 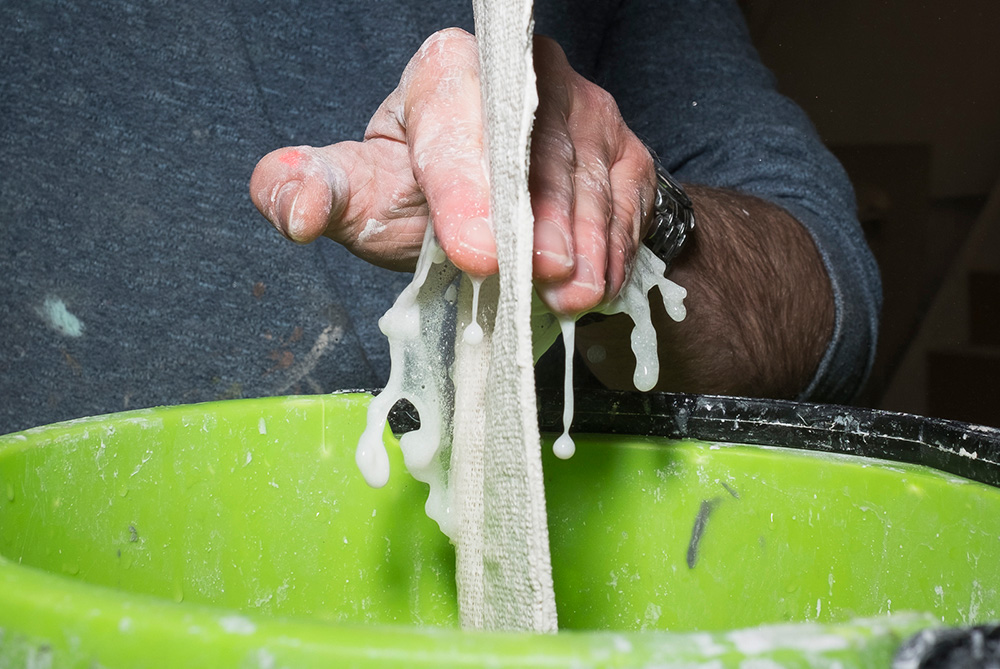 This latest commission was originally for two slugs, one semi-transparent for Björk to be inside of, and the other opaque.

As the project went on, the creatures evolved to have arms and legs, making them something much weirder. “Alien. Almost like an embryo. Slug’s the wrong word really,” says Tristan. “We’ve been having a bit of trouble but we’re gonna make it.”

In the end Tristan and his team only had three weeks to produce the creatures in time for the shoot.

They have had to consider the scale, the aesthetic and the movement that Jesse is looking for, find the correct materials, and – pretty crucially – think about how to keep Björk safe within it.

“The main part of it needs to be transparent in clear europhane, then the legs and the bits that have to be squidgy are gonna be in silicon,” he says.

“I haven’t really used the europhane before, it’s just a bit tougher. The silicon doesn’t go as clear and it’s not as strong as the europhane. Because it’s encapsulating her body, it can’t collapse on her, it’s got to stay quite strong but still be wobbly, like jelly.”

There is an incredible amount of  science involved in this process, and Tristan’s in-depth knowledge of how materials can be used and bonded together is quite astonishing. He speaks of the complicated scientific processes in a charmingly non-scientific way, saying things like: “I’ve gotta bond them two together, the silicon and the europhane. They don’t like each other.”

Alongside his role in helping making some of the world’s most iconic music videos, most of the time Tristan and his studio work on creating endless corpses for Hollywood blockbusters.

It can take a month to make each corpse and they are often blown up or damaged during filming (“Sometimes the extras pull their fingers off and keep them,” he mumbles, “or they start sitting on them at lunchtime…”).

His loud, dusty workshop is comically littered with body parts: limbs dangling out of bins and cardboard boxes full of mummified remains. As repetitive as he finds the corpse jobs, he does seem to enjoy a lot of it.

“The best one I worked on was the last Rambo film,” he admits. “We were in Thailand for four months making blood and guts and dead bodies, and then they’d put dynamite inside them and blow them up. At first you see that and think, oh no! But then after a while you realise it’s just to get the shot.”

You’d think that seeing your work destroyed on a regular basis might be a little deflating. It’s very possible that when Björk finally emerged from her rubbery slug-suit, it became completely useless. It might even have been thrown away, but Tristan doesn’t seem to mind.